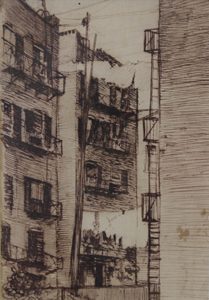 Edward Balthazar’s parents, Joseph Balthazar and Rose E. (Erverine) Roch, were of French-Canadian heritage. Joseph, originally from Rhode Island, brought his Canadian-born bride to Waterbury 1888, first to a house on Oak Street then to 1574 Baldwin Street where they made their family home. Joseph found work with contractor and real estate dealer, J.W. Gaffney, and Rose took care of the household which grew to include eight children, her father-in-law and occasional relatives. Edward was the oldest of the brood and the one to show an interest in art-making. As a youth, Balthazar’s scholastic success was balanced by an artistic urge to draw. A newspaper account identified that by the time he was eight years old, he had drawn the fronts of every building in Waterbury on his sketch pad. The same account revealed that he had also been on the receiving end of “countless parental tannings because he persisted in dawdling on the way home from school to watch sign painters or anyone with a paint can and brush.”

Recognition of his talent came early. As early as 1905, when he was 15 years old, he was making headlines with his art. The city newspaper reported on his painting, a copy of da Vinci’s Last Supper, that he gifted to Crosby High School prior to moving to Canada for prep school. Within three years, however, his happy memory of Crosby High was tempered by loss. His brother, Wilfred Balthazar, nearest in age to Edward, played half-back on the school’s football team. On September 24, 1908, when the school team was in scrimmage practice, Wilfred was injured in the pile-up and suffered a spinal cord injury. His initial outcome after surgery was hopeful but the young man succumbed three days afterwards. The death announcement declared Wilfred “physically a splendid type of man, and very popular among his associates.” The outpouring of condolences included a funeral at St. Anne’s Church described as “one of the largest and most impressive funerals ever held in Waterbury.” Edward’s contribution of a floral display shaped as a heart labeled “Brother” demonstrated the heartfelt sadness of loss. Census records seem to indicate two other siblings, sisters Elvia and Evelyn, may have died in childhood, but records are incomplete. Of Joseph and Rose’s five surviving, all male, children, only Edward remained in Waterbury; Irving moved to New York; Joseph E to Ohio, Elmer to New Jersey and Herman to Rhode Island.