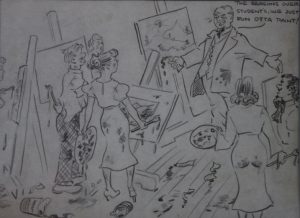 Balthazar did not have the experience of a formal art education but he had opportunities that seemingly had a big impact for the modesty of each circumstance. Growing up in Waterbury, Balthazar was friendly with his contemporary, George Davidson (1889-1965), who went on to have a successful  art career producing murals, portraits and landscapes. Davidson’s family emigrated from Russia when he was eight years old. They settled in Waterbury where the father worked at Scovill Manufacturing Company. Davidson and Balthazar were contemporaries, and knew other as school boys. As an adult, Balthazar reminisced that when twelve years old, the two boys were joined [by another] to “take off on weekends and paint everything they could see.” Local artist-teacher Minnie Rogers Steele encountered the boys around town and encouraged them by providing lessons in her Maple Street studio.

A summer class at the Boston Museum at age sixteen in 1906 was followed by studies with realist painter and printmaker George Bellows (1882-1925), probably at the Art Students League in 1910. But academic achievement kept Balthazar on track for his future career as a lawyer. After graduation from Montreal’s Laval College, Balthazar attended Yale Law School, took the bar in 1915 and began practice in Waterbury. The regulated life of a lawyer was balanced by the freedom he found in the act of creating art.

Though he sometimes worked in oil, Balthazar’s primary medium was etching. Etching is a highly accessible printmaking technique similar to drawing. Using a fine needle point, the artist scratches his design onto a metal plate. The prepared plate is then inked and run through a press. For further information, see this demonstration produced by the Metropolitan Museum of Art: Etching

Printmaker, gallerist and curator Marc Chabot suggests that Balthazar’s total etched production may approach 200 plates. The print run was rarely acknowledged. The artist seemed informal in that regard, Chabot identifies, once done and proofed, Balthazar likely printed a few impressions and moved on to the next. His joy came primarily from engagement with the aesthetic potential offered by the world he knew best: his friends, family, colleagues and his home town of Waterbury. The prints, Chabot says were, quite popular when they were made and the novelty of having an etching of one’s own neighborhood, town or local landmark must of attracted many to them. As decorating tastes changed mid-century towards modern contemporary design, Balthazar’s traditional work may have seemed dated, and falling out of favor, was regulated to antique shops and estate sales. Chabot recalls thumbing through the racks at the Curtis Art Company, (which fronted on the Green) to see Balthazar’s work and suggests that Goldsmith’s Art Supply on Bank Street may have handled his work during his lifetime.