During the early 1800s, Niagara Falls was appreciated for its natural beauty and as a symbol of America’s manifest destiny.  By the end of the century, however, the falls weren’t very natural anymore.  A rising middle-class of pleasure seekers, flush with leisure time and enthusiasm for travel gave rise to a new spectacle – the holiday destination where accommodations and activities of many sorts were provided for the tourist.

An important painting from the Mattatuck collection shows us Niagara Falls before tourism became its major industry. John Vanderlyn, among the first American artists to paint the scene, understood Niagara Falls as a symbol of the power and vitality of the new nation. His faithful depiction in 1803 of the Falls from the American Side gives viewers a sense of both the great expanse and the immense power of the cascading water. With no figures, to disturb its natural beauty, this pure image of sublime majesty fostered feelings of wonder and inspiration. Such sentiments resonated with many Americans who traveled to visit the Falls.

By mid-century, tourism was developing at Niagara and along with it came a desire for souvenirs that tourists could bring home to both recall and share. The Enoch Wood & Sons Company in Staffordshire, England produced pottery and porcelain; they manufactured a Niagara memento now in the Museum’s collection, Plate: Table Rock, Niagara. This transfer-printed, pearlware plate in dark blue records the awe viewers experienced at the Falls. The scene depicts two figures at lower foreground as they stand in wonder on Table Rock. Dwarfed by a large ledge situated at the brink of the Canadian Horseshoe Falls, the visitors stand close to the thunderous crash of the water. 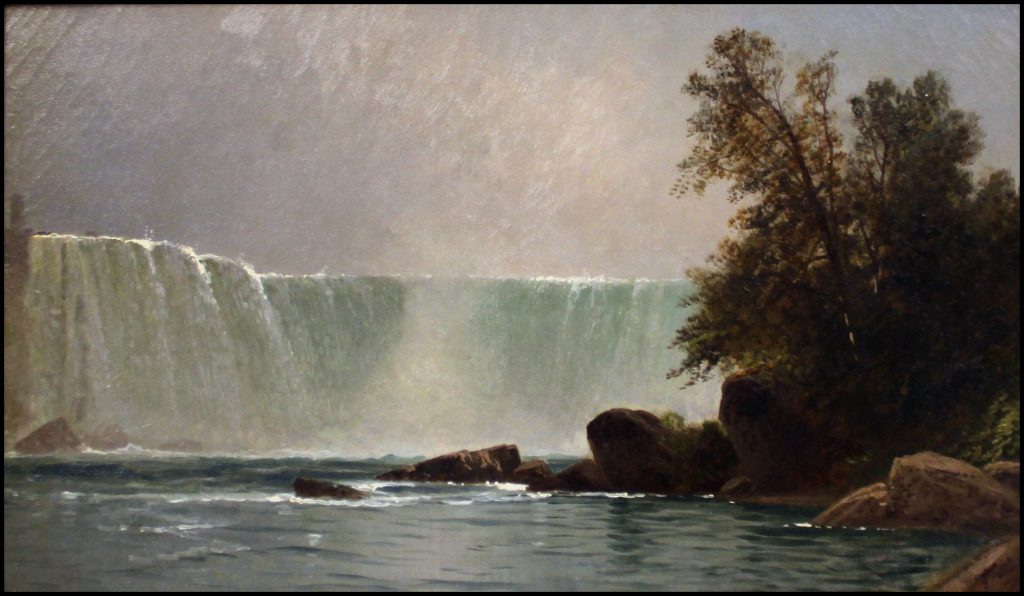 Alfred T. Bricher (1837-1908)
Niagara Falls, 1871-1875
Oil on canvas, 24 1/4 x 33 1/2 in. Oil on canvas, 12 3/4 x 21 5/8 in.In the last quarter of the 19th century, marine and landscape painter Alfred Bricher was at Niagara Falls – in the 1870s and then for a brief period in 1880s.  Sketching during the summer months, he subsequently returned to his New York studio to finish his canvases and expand on ideas gathered from his travels. Bricher’s view is characterized by precise, realistic detail that highlights the sunlit flowing water. A selected view, tourists and their accommodations are not revealed.

Adventurers, exhibitionists and daredevils were attracted to both the falls and the tourist audience they would find there. Tightrope walkers, barrel-riders and other attention getters were soon on site. As seen the Collection photograph, Samuel Dixon (1852-1891), crossed the Niagara River Rapids on a cable below the Great Cantilever Bridge in 1890. He made several crossings and performed stunts on the wire.

It precedes just by 20 years a major transformation to the area that came with the technology, industry and manufacturing. Around 1895, Niagara Falls became the foremost source of hydroelectric power in North America, stimulating the development of innovative heavy industries in Niagara Falls and Buffalo. As Ginger Strand describes in Inventing Niagara (2008) we call Niagara Falls a natural wonder, but the falls aren’t very natural anymore:

Water diverted, riverbed reshaped, brink stabilized and landscape redesigned, the falls are more a monument to man’s meddling than to nature’s strength. Niagara’s story is America’s story, a tale of dreams founded on the mastery of nature.

Strand’s examination of Niagara during our time of environmental crisis might, a critic wrote, help us to rethink our place in nature today. And with the insights gained from a look back to our use of technology to shape the Falls we might still preserve a sense of its power – its natural beauty that belies artifice, and a symbol as William Irwin identified in Inventing Niagara (1996) that happily joins nature and technology.