The Mattatuck Museum has a significant collection of Native American objects, a number of which were on view in a permanent exhibition in the museum’s history gallery. The exhibit, Digging Up the Past: Native Americans in Connecticut, centered on archaeology and its substantial role in the understanding of Native American cultures and lifeways in Connecticut. Archaeological evidence is useful in understanding Native American history prior to colonial contact, but this is not the only way to learn about Indigenous history. Native people continued to adapt to changes in their lives following colonial settlement, and Native artists create visual representations of the historical and present-day experiences of Native people. 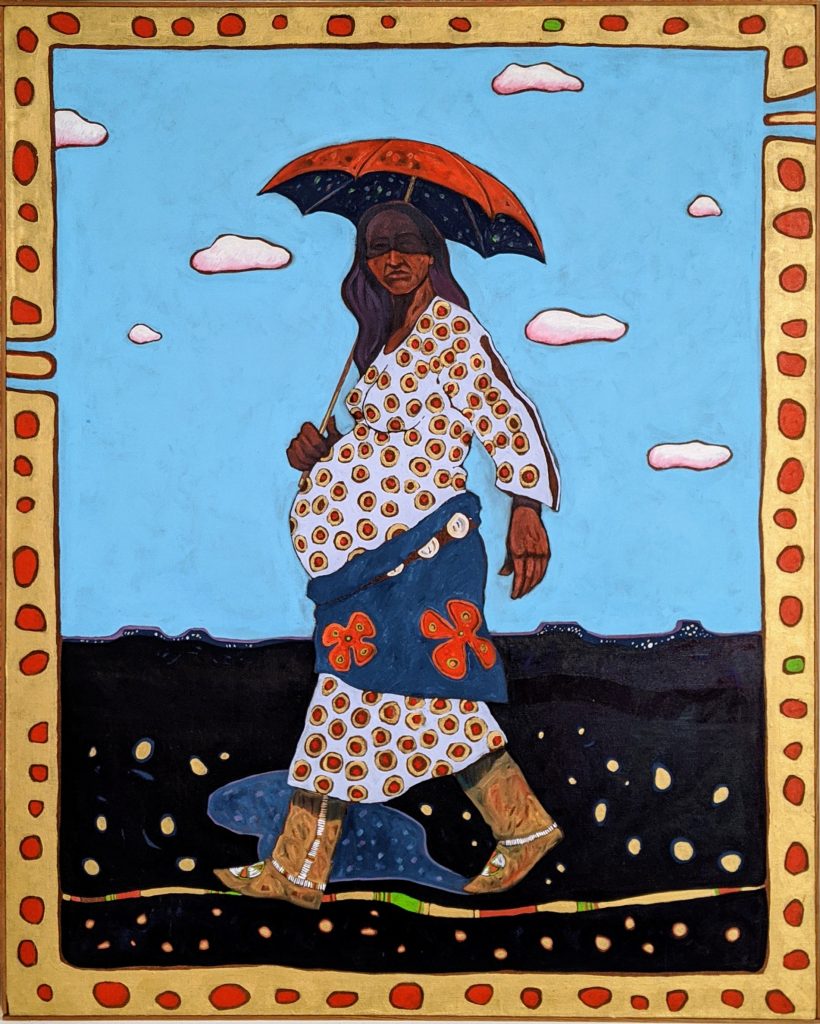 Kiowa/Caddo artist T.C. Cannon, born Tommy Wayne Cannon, grew up in an Oklahoma farming community where they were the only Native American family in the town. Cannon started making art from a young age, but his artistic approach developed during his education at the newly-formed Institute for American Indian Art in Santa Fe in 1964-66. At this school, Native students learned both traditional Native arts as well as Western art styles. This education would allow artists like Cannon to pave the way for a new kind of contemporary Indigenous art. Instead of painting portraits that suggest Native Americans as primitive or part of a disappearing culture, Cannon’s artwork makes the case that Native people are still present, enduring efforts for generations on the part of non-Natives to integrate them into American culture. This painting is typical of his artistic style, using bold, rich, colors as well as combining visual elements of Native culture, such as the female subject’s hide leggings and decorated moccasins, with non-Native elements like her red parasol and polka-dot dress. In painting his grandmother pregnant with his father, Cannon pays respect to family lineage, ancestors, and the importance of grandmothers and mothers in passing down cultural traditions. Women’s roles in carrying Native culture forward and nurturing the second generation became critical in an environment that sought to erase Native cultural heritage. With his pregnant grandmother as his subject, Cannon makes a monument to the Native women that helped keep Indigenous culture alive.