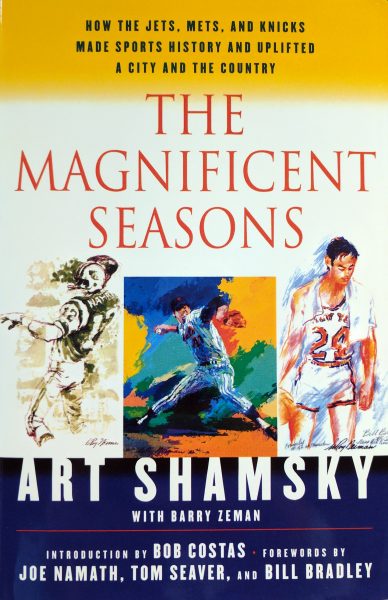 In 1969 three underdog New York sports teams won World Championships. It was an unprecedented feat in the history of sports, and it helped bring the nation’s largest city—and much of the country—euphoria to balance the lingering political despair of 1969. And here, in The Magnificent Seasons, is that story—a re-creation of one of the most magical periods in sports history.

In reflecting on these events, what they meant then and what they still mean today, Art Shamsky, a 1969 “Miracle Met,” introduces the thoughts of members of every team. Highlights include comments from Joe Namath, Tom Seaver, Bill Bradley, Yogi Berra, Emerson Boozer, Jerry Koosman, and many more. But as important as these wins were to the players and coaches who made them happen, their victories meant just as much to the city and the people who celebrated them, and Shamsky includes their perspectives through such personalities as Bob Costas, David Halberstam, Rudy Giuliani, and many other fans of the city and its sports.

Together, the words and pictures within make a wonderful keepsake—a book that lets fans relive three championship runs and gives a true sense of what these sports victories meant to a country suffering through a turbulent period in its history. The words and memories of the players, their fans, and their opponents carry a tremendous emotional charge, and The Magnificent Seasons takes readers back with all the heart-stopping thrill of the time when three teams captivated the country, and when New York City ruled the sporting world.