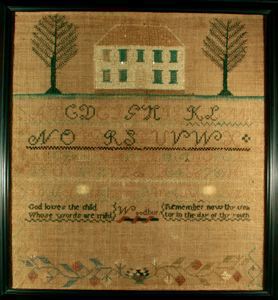 The earliest known American sampler was made by Laura Standish of the Plymouth Colony about 1645. By the 1700s, samplers depicting alphabets and numerals were worked by young women to learn the basic needlework skills needed to operate the family household. The 18th century creator of this sampler is unknown as she did not embroider her name as part of the design.

This alphabet and pictorial-type sampler is worked in many colors of silk floss using cross-stitch which may indicate the maker was a young girl. As described by the Metropolitan Museum of Art, as part of a girl’s preparation for the responsibility of sewing clothes and linens for her future family, most girls completed at least two samplers. The first, which might be undertaken when a girl was as young as five or six, was called a marking sampler. Marking samplers served a dual purpose: they taught a child basic embroidery techniques and the alphabet and numbers. The letters and numbers learned while embroidering a marking sampler were especially useful, since it was important that any homemaker keep track of her linens, some of her most valuable household goods. This was accomplished by marking them, usually in a cross stitch, with her initials and a number. A second embroidery was made in adolescence and was typically more pictorial and accomplished with a wide variety of needlework stitches.