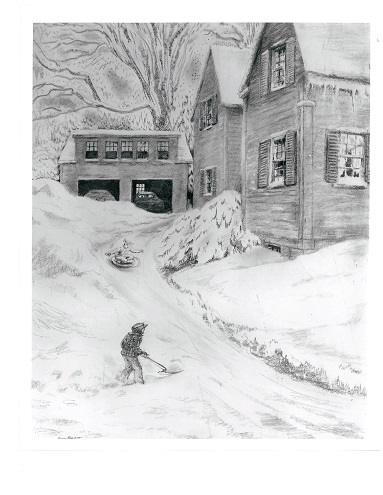 Best known as an artist and author of gentle satire, Peggy Bacon was born in Litchfield, CT to artist parents and raised in Ridgefield.  In 1914, Bacon moved to New York to study at the Art Students League with George Bellows and John Sloan. Like her instructors, she painted aspects of ordinary life, but she treated these subjects with a touch of humor and in a more modern style, simplifying forms and using exaggeration.

Bacon married artist Alexander Brook in 1920. The couple formed part of the New York social realist group of artists later named the Fourteenth Street school and, with their two children, summered in the artists’ communities of Woodstock and Croton, New York. Following her divorce from Brook in 1940, Bacon often worked in Maine. She moved there in 1961, in her later years, where she continued to make art with the aid of a magnifying glass.

This drawing is similar to a 1961 drawing titled Twilight in Kennebunk (Collection Brick Store Museum, Kennebunk, ME). Both use the snow-covered house, garden and garage as subjects. Twilight in Kennebunk is a broad view giving wide space in the foreground and at left. Bacon activates that larger prospect with trees, a pond and hills; additional children and a cat are at play. The Mattatuck drawing, Powdered Sugar brings the viewer close to the action in a slice of that broader vista. Here the focus is the long drive up from the road to the house. A child skimming down the snowy drive in a “saucer” enjoys winter’s fun while a fellow at left deals with the work of the season, shoveling to clear a path to the house.