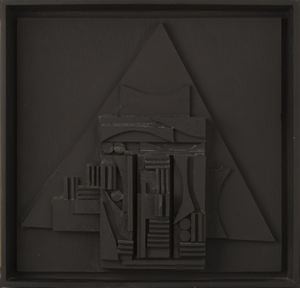 As an art student in New York during the 1920s, Nevelson developed an interest in Picasso and Cubism and found direction for her sculptural work. She moved from small Cubist figures in stone, wood and metal in the 1930s to abstract wood assemblages in the 1940s. These assemblages often included ready-made components. By the mid 1950s, she had begun to incorporate wooden shapes of increasingly diverse origin into boxes, reliefs, columns and walls. The walls were fixed in modular units, usually wood, but occasionally aluminum and plexiglass, painted a uniform color, typically black, though white and metallic colors were sometimes used. These unique environmental installations brought her to prominence.

The black-on-black wood relief here, a multiple, was given to the sixteen winners of the National Book Awards in 1981. In describing the special award she created, Nevelson explained the use of basic and timeless forms such as the triangle, cube and pyramid saying the art is a “connection to the past and sense of projection to the future which is what writing is about also.”