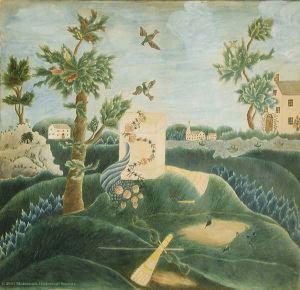 This decorative watercolor has the characteristics of paintings produced by students of the Litchfield Female Academy (1796-1833). It unites domestic structures with a lush landscape in a subtly colored palette of greens and blues. The view recedes from a hilly foreground to waterfront scene at center right to a background of blue sky where two birds take flight. Its compositional elements have shapes and lines similar to embroidery stitches. A threaded needle at center foreground – most likely a signifier of domestic life – prompts the correlation.

Signed by Lorena Tomlinson, later the wife of Samuel Meigs and the mother of five children, its theme of this wedding picture is drawn from Greek mythology. The temple of Hymen, also called Hymenaeus, is the shrine of marriage. Hymenaeus was the god of weddings and a god of song; he was usually described as a son of Apollo and one of the Muses. The word “Love” is delicately penned on the temple that occupies central prominence in this charming scene.