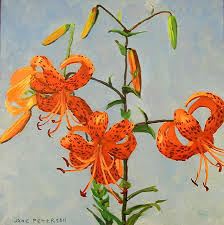 During her lifetime, Jane Peterson was celebrated for her colorful paintings of festive subjects. Her vibrant images provided a vital link between the Impressionist and Expressionist movements in American Art.  Her subjects included floral still-lifes, Gloucester harbor scenes, Venetian vignettes, New York City, and scenes of North Africa and Constantinople.

Floral subjects were a natural for Peterson who loved to garden, but they became the only subject for a while. In 1925 Peterson, then forty-nine, married retired lawyer Bernard Philipp, then in his late seventies. His wealth allowed the couple a lavish lifestyle. Philipp did not support Peterson’s choice subject matter, however, preferring the more genteel topic of flowers over city street life and travel abroad. Peterson, who was a garden lover, demurred to her husband’s wish and thereafter, during their marriage,  flowers were her focus.

Tiger Lilies is a sample subject in Peterson’s best-selling instructional book about painting flowers. Peterson employed the plant’s distinctive vertical shape to excellent use. The major stalk rises to the top of the canvas while its fantastic red-orange blooms fill the horizontal space. Silhouetted against a gray sky, the flower portrait is a rhythmic arrangement of size and shape.