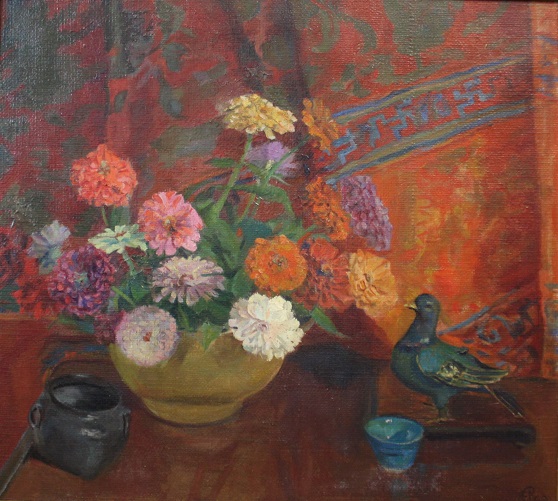 The Reverend Edmund Rowland, Elsie’s father, encouraged his daughter’s talent — he understood the creative urge, though the minister’s gift was music. In 1892 he organized an all-male choir for St. John’s Episcopal Church and expedited the gift of a chancel organ. Her mother, Sarah Belknap Rowland, the daughter of a Hartford banker, ensured that Elsie had a full education. Elsie received a certificate from Yale’s School of Fine Art in 1889.  A year later she married Frederick Starkweather Chase, secretary and director of the Waterbury Manufacturing Company. Elsie Chase was active in Waterbury’s civic and cultural affairs. She was the center of a happy family life; painting and gardening were among her enthusiasms. The two interests merge in this floral still life.

Floral imagery has been a consistent theme in American art from the colonial period to the present day. Rather than a mixed bouquet, Chase chose to celebrate just one flower in her painting – the familiar zinnia. Bright pink, orange, purple and white blooms are arranged in a (probably) brass bowl, set atop a wooden table against a fabric draped background. Alongside are blue ceramic objects including a jar, a small bowl and a bird figurine. Richly colored and with a sense of textural variety, the scene echoes the sensory enjoyment of sitting in a garden.