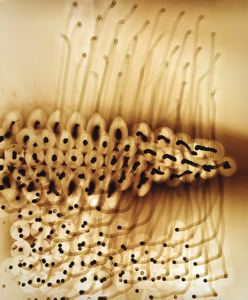 Since the 1990s, experimental photographer Ellen Carey has been making images that defy photographic conventions of depicting identifiable subjects. She has worked in a variety of cameras and formats: Polaroid SX-70 and Polaroid PN film; black/white to color; 35mm, medium, and large format. She also creates images without a camera.  In January 2019, Carey, a professor at Hartford Art School at University of Hartford, was named one of the world’s 100 best female photographers by the England-based Royal Photographic Society.

Carey’s photogenic drawings pay homage to William Henry Fox Talbot (1800-1877), one of the inventors of photography in 1841. Carey’s “Struck by Light” is the name of her umbrella concept and artistic practice; it refers to artworks made under a method developed by Talbot called the photogram. Photograms are photographs made without a camera. These lensless works are made in the darkroom with light sensitive paper. The images are optical inventions, often abstract. In 1992 Carey began to make these photographs with a stark palette of black and white as in Zerogram which shares the strange, moving, dotted round forms seen in Photogenic Drawing. The Mattatuck photogram reflects Carey’s move to warm ones and muted color as the work developed. Carey used unconventional non-art objects such as metal push pins and glass marbles to interrupt the light that then creates the abstract shapes.