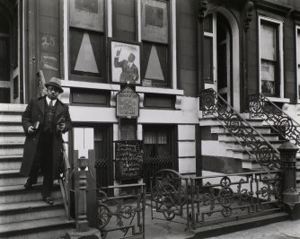 Berenice Abbott is best known for her documentation of New York in the 1930s. Her best-known and most influential work, Changing New York, represented both a vast exercise in recording the architecture and urban life of New York and an intensely personal artistic project. Her straightforward method of photography led to her being employed full-time in the 1950s by the Massachusetts Institute of Technology in Boston to produce pictures illustrating the laws of physics.

This image is one of a group of works Abbott produced for the New Deal program, The Federal Art Project. The scene is the Pilgrim Pentecostal Church of God, a storefront church in Harlem. Abbott brought together in a single picture her interest in New York’s architecture, people, and activities. The Reverend Elder Johnson, seen descending the church steps, was pastor to the congregation’s twenty-eight members.