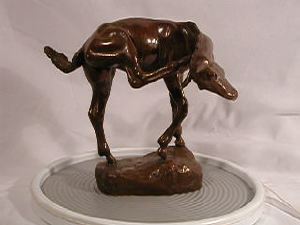 At the age of thirteen, encouraged by her mother (a painter) and her father (a Harvard professor and naturalist), Huntington began sculpting animals. She studied in New York and Paris and became a successful artist, famous for her sculptures of animals that she created with skillful realism and emotional depth

With her marriage to Archer Huntington in 1923, she became a patron of the arts. They founded Brookgreen Gardens in 1931, the first public sculpture garden in the United States. They also gave the Collis P. Huntington State Park, which consists of approximately 800 acres of land in Redding (where they had a home), as a gift to the State of Connecticut. Two statues by Huntington mark the entrance to the park. One statue shows a mother bear with her cubs and the other statue shows two wolves howling.

Throughout her career Huntington worked on every scale, from the medallion to the monument. Work on a small scale, such as this piece, kept her attentive to the minute play of muscle under skin and to the tactile pleasures of pieces that could be handled. They also sometimes revealed a certain sense of humor, as we see here in the horse’s unconventional pose, reaching with his hind leg across his body to scratch the itch caused by a pesky fly. The horse was Huntington’s favorite subject, an affection developed in her childhood.