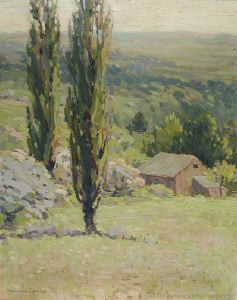 The child of a family with deep roots in the Litchfield community, Adelaide Deming left Connecticut for New York to study art. Around 1900 she enrolled at the Pratt Art Institute to study with the prominent teacher, Arthur Wesley Dow (1857-1922). After graduation she remained in New York taking the position of drawing teacher at Pratt, a position she held for eight years from 1902-1910. In New York she enjoyed early success as an exhibiting artist. In 1908 she won the Beal Prize for the “most meritorious” work awarded by the New York Water Color Club. And between 1914 and 1915, her name was in the art journals almost monthly with announcements of her inclusion in group shows as important as the San Francisco Panama-Pacific Exposition. At just this time, Deming returned home to Litchfield, and though she exhibited with New Haven’s Clay and Tile Club and the Connecticut Academy of Fine Art, once away from the center of the art world, her name and art garnered little critical notice.

New England landscapes, especially Connecticut scenes, provided most of her subject matter. This view was identified by the donors of the work as “painted from back of the Hoppin House,” one of the oldest on Litchfield’s North Street. Yale Professor James Hoppin bought the residence in 1871 and made it his summer home until his death in 1906.